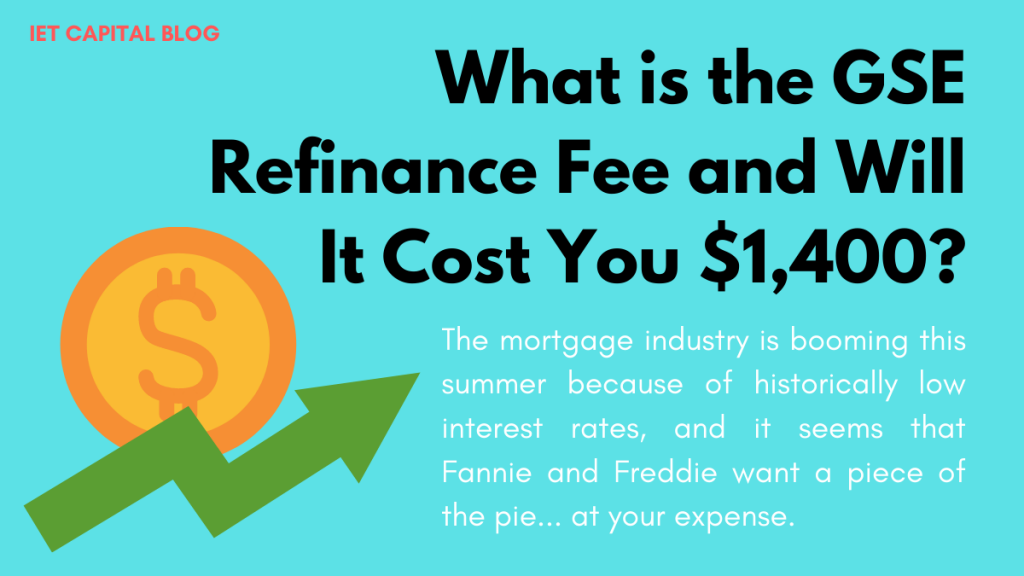 The financial crisis due to the pandemic has caused mortgage interest rates to hit historic lows, breaking new records over and over again. Homeowners have capitalized on these rates by refinancing their current mortgages, which means lenders have seen an uptick in business this summer.  It created a win-win-win scenario when American’s desperately needed it–homeowners could benefit from lower monthly payments, lenders could keep their people employed, and one facet of the economy was still chugging along…

But then early this month, the FHFA and GSE (that’s “Government Sponsored Enterprises”) Fannie Mae and Freddie Mac announced that starting September 1st, they would be imposing a fee for those refinancing their mortgages. This announcement was so short notice, that many people who were already in the process of refinancing but wouldn’t have time to close the deal by September 1st would be hit with this unexpected fee—a one time charge of .5%. The fee does not apply to mortgage purchase loans.

How much does that shake out to? The median home price in America is $291,300, so a .5% charge on a loan that size would be $1,456. But, according to the Los Angeles Times, as of July, the median home price in Southern California is $585,000, so with that loan, the charge would be $2,925. This cost will fall to the homeowner, though the lender can also elect to absorb the fee.

Originally, the GSEs explained that the fee was a matter of “risk management” in the face of the financial crisis. But in a subsequent letter addressing concerns over the charge, they referred to it as a “modest fee” that will help them continue “helping those who are really hurting during the pandemic.” Many mortgage professionals think the reasoning is far more cynical—they saw everyone else benefitting off the boom in refinances and they wanted to get in on it too.

Companies and politicians on both sides have been outspoken in their criticism of this new fee. The National Association of Mortgage Brokers launched a campaign to reverse the fee and gained 10,000 supporters within 24 hours. On the 21st, 41 bipartisan members of Congress signed a letter that included their objections to the fee. The White House said it had “serious concerns,” and Democratic senators Elizabeth Warren and Sherrod Brown wrote a letter to the FHFA asking, among other things, why they think “homeowners are better suited to bear part of the cost of this economic downturn than the Enterprises?”

Then on August 25th, the FHFA announced it would move the start date to December 1st and would be exempting refinance loans with balances below $125,000.

Because mortgage rates are so low, even with the fee, mortgage holders looking to refinance will still save money on their monthly payments, it just won’t be quite as much. If you were hoping to capitalize on these interest rates by refinancing but haven’t gotten around to it, the time to do it is right now. The rates are still incredibly low, but they are beginning to inch back up, slowly but surely. You’ll want to grab the lowest rate possible, and now that the start date has moved, if you move fast you can close your deal before December 1st and avoid the fee. Get in touch with us today–seriously, today! Email us or gives us a call at (323) 412-9060 and we can get the ball rolling on your refinance right away.

Apply for a Home Loan